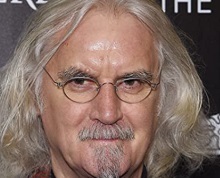 He will be interviewed by his wife, writer and psychologist Pamela Stephenson Connolly and looking back over his several decades of success and extensive body of work.

Also in the line-up for the festival which begins on Monday and which is digital this year due to ongoing restrictions on indoor events in Scotland, is songwriter, actor, director and producer, Lin-Manuel Miranda. The multi-hyphenate will be interviews in Cardiff by Bad Wolf CEO, Jane Tranter.

Among the Masterclasses for this year’s programme is Prime Video’s 2020 behind-the-scenes documentary series, All or Nothing: Tottenham Hotspur, which spans one of Spurs’ most defining seasons to date. The masterclass, hosted by Radio 1’s Rickie Haywood-Williams, will include Amazon Studios’ Dan Grabiner, the programme makers, 72 Films’ John Douglas and Clare Cameron, and contributions from international and Premier League footballer Eric Dier, who has played at the club since 2014.

Other speakers and sessions for 2021 include Jack Thorne, who will give The James MacTaggart Memorial Lecture Whoopi Goldberg, masterclasses on We are Lady Parts and Gomorrah and Spotlight sessions with major decision-makers from UK and international broadcasters and global streamers.


There will also be a session hosted by Adeel Amini on the freelance charter and Coalition for Change agreement, which was officially launched at last year's event.