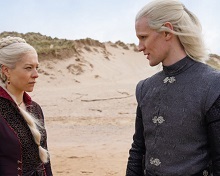 The sound stages will provide an additional 83,000 sq. ft. of additional production space at the facility and marks the opening of V Stage, one of Europe’s largest virtual production stages.


Offering 24,000 sq. ft. of total space, the inside will feature a 7,100-sq.-ft. wraparound virtual production environment, using a matrix of more than 2,600 LED panels integrated with a powerful processing system. Bespoke to this design is a dynamic ceiling offering an additional 5,544 sq. ft. of LED panels with eight sections that lift and tilt independently of each other.

House of the Dragon, HBO’s prequel to Game of Thrones, is the first production to use the new facilities.

“With the show’s incredible imaginary worlds and exceptional quality HBO always delivers, House of the Dragon is the perfect production to maximize the unparalleled opportunities this space offers.”

“A production with the ambition and scale of House of the Dragon really requires a studio that can provide cutting-edge facilities,” said Janet Graham Borba, EVP, West Coast Production, HBO. “The new virtual stage adds to the highly supportive home hub for the show at Leavesden and lets us take full advantage of the latest developments in technology.”

Since opening in 2012, WBSL has continued to develop and expand, and is now home to 19 sound stages, two water tanks and an extended backlot covering over 100 acres of clear horizon exterior landscape. Additional services include the only on-lot childcare facility in the UK, an onsite set lighting and rigging department; and post-production sound and picture services.

Image: Emma D'Arcy as Princess Rhaenyra Targaryen and Matt Smith as Prince Daemon Targaryen in House of the Dragon, via HBO.

Netflix has acquired the Roald Dahl Story Company (RDSC) in a partnership deal that will see the streamer create a unique universe across multiple genres.

The first production to use Glasgow’s historic Kelvin Hall, now a new film and TV studio, has now wrapped.

BBC Two and BBC Nations have announced three new prime-time series, the result of a co-commissioning opportunity for suppliers based outside London, announced last October.

EXCLUSIVE: Wool, a major new drama from AMC Studios for Apple TV+, begins filming next week in the UK, at a temporary studio in Hertfordshire.

The BBC has announced a tranche of new factual, arts and classical music commissions, including a documentary series about Frida Kahlo and her relationship with Diego Rivera.