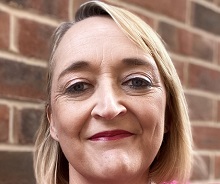 The 6 x 60 drama is written by Susan Everett (Hinterland, Silent Witness) who will also executive produce alongside Jeff Norton and Zoe Rocha of Dominion of Drama and RubyRock Pictures respectively.


Sara Curran, whose company Tricycle Media is a partner of Norton’s is also attached to exec produce, as are Greg Phillips, Graham Begg and Vicky Ryan from Rainmaker.

Amy Winter centres on the life and cases of a young, British female detective inspector who discovers that her biological parents were notorious serial killers. There are presently three novels published in the franchise with an additional three under contract.

Norton said: “Caroline Mitchell [pictured] has established herself as a significant force in British crime fiction, bringing an authentic voice to the genre based on her years of experience as a detective.”

Rocha added, “This is a special opportunity to create a female-forward entry into the crime genre, focused on a hyper-competent millennial detective, filled with chills and thrills but also warmth and deep emotion.”


Writer Everett said: “Caroline Mitchell has created such a complex and compelling character in Amy Winter, and it’s a real thrill to bring her from novel to screenplay.”

Aerialworx is the go-to drone operator for all your cinematic, dynamic and creative aerial drone filming requirements in Manchester, North Wales and Scotland.  Established in 2013, with… more Call: 0345 459 8899   |   Add to Shortlist

Aerialworx is your go-to drone operator for all your cinematic, dynamic and creative aerial drone filming requirements in North Wales and Manchester. Aerialworx Wales is… more Call: 0345 459 8899   |   Add to Shortlist

Brooks Smith Media are based in Hertfordshire near Leavesden Studios, Bovingdon Studios and Shepperton Studios. We carry an Open Authorisation from the CAA which allows… more Call: 01442 800900   |   Add to Shortlist

Upper Cut Productions Ltd is a leading provider of remote aerial filming and photography in the UK with over 10 years’ experience. If you're looking… more Call: 07974 382443   |   Add to Shortlist