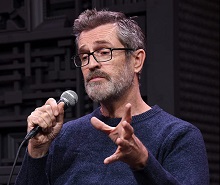 Production is due to get underway in London this week on Lead Heads, starring Rupert Everett, Derek Jacobi and Tom Felton.

Giles Borg directs the film from a screenplay by Patrick Makin. The film is described as being “about greed and the repercussions it has on the soul”. Luke Newberry, Olatunji Ayofe and Mark Williams are also among the cast.

The story centres on a group of men who, although strangers, are drawn together in their shared, greedy desperation to play a game that may cost them their lives…

Everett is also listed among the cast of My Policeman, an Amazon feature based on Bethan Roberts’ novel set in Brighton, due to begin filming soon.

Following the recent news that Hackman Capital Partners (HCP) has invested in building Eastbrook Studios, the global real estate and operating company has now confirmed it is funding a second filming facility, also in the borough of Barking and Dagenham.

Filming starts on You Don’t Know Me

Filming gets underway this week on BBC One’s You Don’t Know Me, a four-part drama adapted from the book by barrister and novelist Imran Mahmood.

BBC One has ordered a new fictional crime drama from James Graham and House Productions about two shocking murders that took place in an already fractured community.
?

Save The Cinema starts Welsh shoot

Filming is underway in Wales on Save The Cinema, directed by Sara Sugarman from a screenplay by Piers Ashworth.

Hakan Kousetta, COO of television, See-Saw Films, has been appointed Pact chair for the next two years.