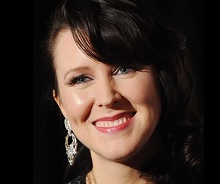 Alice Lowe’s next feature, Timestalker, is now set to film this summer with HanWay Films on board the project.

Writer/director Lowe’s film comes from Western Edge Pictures and is described as a ‘reincarnation romcom’ – a subversive story of one woman’s unlucky-in-love tale that spans several centuries.

Heroine Agnes (Lowe) repeatedly falls for the wrong guy, dies a gruesome death, gets reincarnated a hundred years later, before meeting him again and continuing the cycle…

Lowe (pictured) said: “It's so exciting to be working on a grander scale on Timestalker - but with the same crafting of script and comedy improv and brilliant actors. This film is my homage to the most romantic epics. Lavish, lush and overflowing with emotion! This film is going to be shameless. All blusher and petticoats and suicidal lovers. The romantic era we all need a pinch of right now! Romance isn’t dead!”


Producer Vaughan Sivell of Western Edge Pictures (WEP) added: “We're so excited to build on the success of Prevenge and can't wait for this new adventure with Alice. TIMESTALKER is luxurious and bold and full of heart, and mad obviously. And WEP/Gennaker have the perfect partners for it in HanWay.”