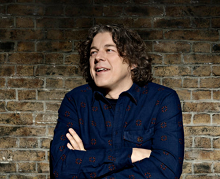 The chat show format is produced by Phil McIntyre Television and will be recorded at The Roundhouse in Camden in December and January for tx next spring.

Dave head of comedy Iain Coyle said: “I love this show, it's always warm, engaging and hilarious. Alan has such a gift for teasing brilliant stories and humour out of people, it always makes me want to be around the table with them.”