Cobra 2 to film Manchester and Liverpool 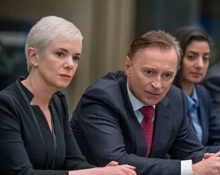 Exclusive from KFTV: Sky One is set to begin filming the second season of its hugely popular original thriller series, Cobra, from early next month in Manchester and Liverpool.

The previous season about how the British government, led by Prime Minister Robert Sutherland (Robert Carlyle) and its COBRA committee, dealt with the chaos of a mass power outage and rioting also filmed in Greater Manchester and other parts of Yorkshire, as well as scenes around London landmarks and at the University of Liverpool.

With the current Covid-19 crisis facing the real British government, filming of Cobra in Manchester and Liverpool will be taking place with strict protocols in place, including social distancing and mask wearing. “With all the new measures, it’s non-stop at the minute,” confirmed a production member of the show.

Greater Manchester recorded its highest weekly coronavirus infection rate last week since the start of the pandemic. Manchester currently has an infection rate of 477.4 cases per 100,000 people (as of Saturday October 24).

The second season of Cobra will see an assassination on British soil that unleashes a chain of events that threaten to develop into a crisis even more serious than the previous one. An apparently invisible global enemy, not playing by the rules and operating outside national boundaries, appears to be bent on our destruction and nobody really knows who is friend and who is foe.

The first season of Cobra achieved a cumulative launch audience of 2.2 million, making it one of Sky One’s most successful drama series in recent years.

This article first appeared exclusively on our sister site, KFTV.

Netflix has doubled its production spending in the UK to £750m ($1bn) this year.

Filming wraps on Line of Duty 6

The sixth series of BBC One’s Line of Duty has just wrapped filming at its usual base in Northern Ireland. The drama had resumed filming in late August after an enforced hiatus due to the pandemic.

The second series of Warner Bros. Television and Apple TV+’s comedy Ted Lasso is in pre-production at a London studio readying to begin filming in January.

The second series of Hulu’s historical satire The Great has begun filming in London.

The Witcher returns to studio shoot

Series 2 of  Netflix' The Witcher is returning to its south-east studio base as the lockdown is set to kick in from tomorrow, 5 November.