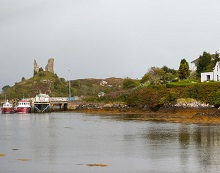 Set in a small Scottish village, the 8 x 60 is a mystery thriller through a musical prism that will feature original songs covering a range of styles from Scottish folk to its American musical descendants.

Buchanan, who exec produced the US series Nashville for six years since its inception in 2012, was formerly the Opry Entertainment Group president.

He said of the commission: “Claire Mundell and Synchronicity are the perfect producing partner to help bring this show to life.

“We plan to capture the same authenticity and dramatic flair that is true to Scotland that we found with Nashville.”

Claire Mundell, MD and creative director of Synchronicity: “We’re thrilled that Steve chose to bring Shepherd’s Retreat to Synchronicity and we’re excited to be developing a show with a modern twist to a much-loved genre.

“Shepherd’s Retreat is an evocative, soulful, compelling drama with all of the best elements of a mystery thriller, taken into a new realm by music rooted in Scotland’s enigmatic rural landscape.”