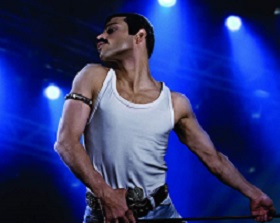 The Media Production Show (MPS) is now in its fourth year and its third at Olympia London.

MPS showcases talent and technology across the creative sectors, and this year will take place on 11 and 12 June.

With a wide ranges of exhibitors already confirmed, the event will also see a plethora of industry experts taking part in themed seminars across six theatre spaces.

This year also sees the addition of the Broadcast Sports Zone, which will house sessions including Multi-Camera Directing in Sport and Sports Fan Engagement.

Here we take a look at some of the sessions and panel discussion taking place at the Keynote Theatre across the two-day show.

Production designer Aaron Haye will be speaking to The Knowledge’s Nick Goundry about the making of Bohemian Rhapsody in a session on Day One.

The Keynote Theatre is also the venue for a session called Entertainment Juggernauts – the art of running a Saturday night entertainment show, with Britain’s Got Talent series producer Ashley Whitehouse and Remarkable’s creative director Dom Waugh.

There will be a focus on scripted content with two drama sessions: UK Drama – State of the Nation includes appearances from Karen Wilson, joint MD of Kudos, and Dan Isaacs, COO of Sister Pictures, while later that day writers James Graham and Vinay Patel will be appearing at the Drama Screenwriters Masterclass.
Film gets a look-in at the Keynote too, with Film4 head of creative Ollie Madden among the speakers at a session entitled Future of British Film.

Technical elements are also covered with cinematographer Robert Shacklady speaking at The Art of Cinematography session and the Editors Masterclass.

Representing the non-scripted aspect of content, Leo Pearlman of Fulwell 73 is among the figures appearing at a sessions called What’s Up Doc? looking at the changing documentary market, while earlier that day there will be a panel discussion about the making of large-scale factual shows known as Super Docs.

Click here to register for the Media Production Show, on 11 and 12 June at Olympia London.

UKTV has ordered another series of Sliced for its comedy channel Dave.

David Jason is to front a new factual series for More4 exploring the stories behind a range of ground-breaking inventions.

Principal photography has begun in the UK on Venom 2, the follow-up film starring Tom Hardy as Eddie Brock, an investigative journalist with superhuman powers.

Sitting in Limbo gears up for filming

BBC One feature-length drama Sitting in Limbo is gearing up to film towards the end of November.

At Skypower, we have the most cutting-edge drone and camera technology on hand to capture stunning aerial footage for your TV or film production. Operating… more Call: 020 8166 9712   |   Add to Shortlist